skip to main | skip to sidebar

How I Became a Stamp Maker

My first blog entry will have to be about how I started this business.

My darling husband is an engineer and a great hobby starter, but a poor completer. 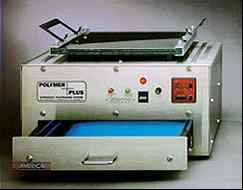 In 2001 he bought an expensive machine to make patterns for casting bronze plaques.

After several months of this machine sitting around, I asked him what it was really used for.

He said that people use it to make rubber stamps, which was apparently a big hobby.

After several hours searching the internet and looking at magazines I decided to use the thing to make stamps to at least pay for the machine, so I took it over.

Although it is supposed to be easy to make a stamp. it turns out there were lots of little tricks to learn.

Back in 2001, clear stamps were still a novelty, red rubber ruled the hobby.

One happy mistake and I discovered how to make the stamps self sticking. It was quite the thing to convince people to buy at first.....but of course now everyone has at least seen self sticking.
My first sale was from an ad in the back of a rubber stamp magazine , so you could say I started out in mail order. I even made a bunch of plaque patterns for a local foundry, which was the original intended use for the machine.

I made my first website with MS Publisher which came with my home computer. Although there was no cost, there were many hours of frustration, but believe me, if I can do it anyone can!

I went online for the first time December 2002, and the rest can be told in another blog.

BTW: Now it is 7 years later and DH still hasn’t made a bronze plaque !
Posted by VillageImpressions 3 comments: